Experiment: How Effective is Prototyping? Measuring Developer productivity in Python and Rust with Project Euler

I was interested in the time-effectiveness of problem-solving different programming languages. I looked for research around comparative developer productivity across languages, but came up mostly empty-handed, so I constructed an personal experiment using Project Euler.

Professionally, I write Rust for the smart contract platform NEAR. Years ago, I learned to program in Python, though have not written much for several years, and wanted an excuse to brush up.

I solved the first 50 problems in Project Euler in Rust and Python, randomizing the language I started in, then translating the solution to the remaining language. I timed each part of the process. After an adjustment period to regain Python familiarity, I found that solving problems in Python was substantially faster than solving the problems in Rust, even despite my greater experience with the Rust programming language.

My data suggests that any problem taking 35 minutes or more to develop a solution in Rust alone could plausibly be solved quicker by first developing a solution in Python, then translating the solution to Rust.

I note that there are confounding factors to my case study whose effect sizes I have little capacity to estimate the impact of; readers are advised to refrain from over-extrapolating from a case study by a single developer on his sample size of 50 (actually 24, see Confounding Factors below) scope-constrained problems. 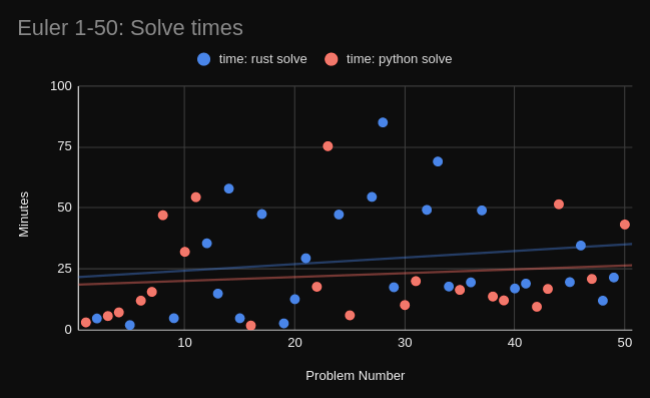 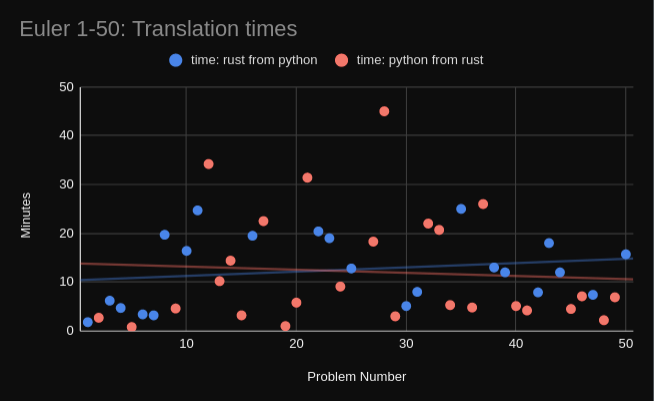 Looking but not Finding: The Curse of Walled Garden Research Journals

On Google Scholar and Arxiv, I searched for:

among several other permutations of keywords.

Unfortunately, results from Google Scholar of any relevance were universally behind journal paywalls, while results from Arxiv were irrelevant. Several results looked reasonably promising, but lacking a subscription to SAGE, Elsevier, or IEEE, the closest I got to any substantial research about the comparative effectiveness of programming languages in terms of developer time was an article by Donnie Berkholz on "Programming languages ranked by expressiveness" from 2013, which was reasonably interesting, but entirely off topic for this review.

I'm not a professional researcher. If someone with more research cred has insight about how I might do better research in the future without paying for journal subscription, I'd love to receive an email from you at thorck at protonmail dot com.

Over the course of the experiment, my life was at least a standard deviation over the mean Level of Chaos (the other LoC). Travel, a job change, and personal life changes extended the length of the experiment and disrupted a couple problems. If disrupted, I stopped my running timer and added the taken time to the remaining time to complete the problem. Nevertheless, the variance effects of my meatspace environment on my programmatic attention is difficult to account for. I dropped two problems (18 and 26) from analysis, as they were subject to repeated interruptions and false starts.

My sample size amounts to 50 problems, of which the first 10 were unusually easy to complete. My python fluency returned over the course of the experiment, and the earlier questions are unlikely to reflect the actual results of the experiment. The final 24 problems are a better indicator on effectiveness of Python implementation, and from what I draw my results. This is admittedly, not a large sample size.

If I return to Project Euler for problems 51-X, I would like to test my hypotheses that whiteboarding would likely be as effective as, if not more effective, prototyping a solution in Python.

I'd also be interested in swapping Rust out for another language. Among my industry's lingua franca are Rust, Go, Typescript, and Solidity, though I maintain a personal fascination with more functional languages. Of these, I'd probably choose to swap out Rust for Go (admittedly a very unfunctional language).

Finally, Project Euler problems are reasonably small-scope, and well defined by programming standards. Research on the value of prototyping, for instance, a command-line tool, or a website would be interesting. How significant would differences in language libraries be in confounding the value of prototyping? Is prototyping a better tool for closely scoped problems in general, where the translation from one language to another is reasonably direct? I would guess that, the greater the difference between language libraries, the less worthwhile using another language to prototype would be, as I have done here. But for problems of simple algorithm definition, prototyping seems likely to be at a local maximum for developer utility.